Sometimes issues arise that you simply can’t account for. One of those instances is occurring right now out in the twin ports of Los Angeles and Long Beach.

Because of an influx of imports before the holidays, a shortage of trucks (which we’ve spoken about previously) and larger ships carrying more freight, the cargo can’t be moved off quickly enough, causing delays. Many retailers have products on these ships that are being delayed getting to store shelves.

Currently, the backlog is about 7-10 days. However, the LA Times reports that Gene Seroka, the Port of Los Angeles Executive Director, says the delays aren’t getting any better—in fact, they’re increasing.

As the holiday shopping season quickly approaches, this could leave retailers without items on shelves and e-commerce fulfillment warehouses without items in stock. Some retailers are rerouting their ships to other ports, while others have begun shipping their products by air – both of which are costly.

Seroka expects the busy traffic to last until mid-November, but in the mean time, they’re taking measures to help combat the congestion. 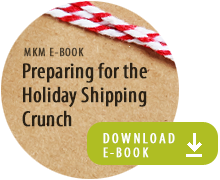